Cyrus Meurant’s album, Seul, is no doubt a play on the fact that Meurant himself plays the instruments by himself, a synthesiser in the first track, and a violin in the second. A graduate of the Sydney Conservatorium of Music, he has also studied in France and London. He can be seen in town performing on violin and synthesiser at venues such as The Stone Gallery, in Wollongong at the Wollongong City Gallery, and in Newcastle at the Playhouse.

Seul is divided into two tracks: The Clearing and Reflet.

The Clearing takes cues from New Age and minimalist music, stretching out for almost nineteen minutes of organ patches in repeated riffs. The piece teeters on the edge of sincerity and irony – on the one hand, The Clearing asks for the kind of quiet self-reflection inherent in much of minimalist music. On the other, its use of kitschy organ patches casts doubt on the whole proceeding, as if the guru on the mountaintop were to break his meditation to wink at you. I’ll give Meurant the benefit of the doubt and say that The Clearing is a commentary on the self-important faux-spirituality invoked by latter-day minimalists and New Age enthusiasts.

Reflet, the second track, is more engaging from the start. The recorded violin loops are a welcome change from the organ/synth in The Clearing, and the imitative textures are reminiscent of Ingram Marshall’s music (another composer whose music often walks the New Age line). The form of Reflet is based on the arc of rhythmic activity in the violin loops, is easily accessible – this piece aligns more closely with the acoustic music that Meurant has put on his website, which I found to be much more engaging. I find the production of this piece to be a distraction. The acoustic parts are overly soaked in reverb, and the omnipresent echo effect, while tied to the imitative nature of the piece’s architecture, feels like a cheap move, like an ‘artsy’ Instagram filter. This may have been done to keep the entirety to Seul in the same sonic space, though, and if so, the noticeable production effects could be in the same vein of commentary as what could be taking place in The Clearing.

After 10 listens through, Seul still asks more questions than it answers. Is Meurant inviting his audience to use the spiritual self-reflection of minimalism as an opportunity to shift focus onto minimalism’s spiritual tropes themselves? Are we supposed to hear these indulgent and obviously perceptible tropes ironically, or naively? Ultimately, the only one who knows for certain is Meurant. The only judgment we can make is whether or not everything works. For me personally, it’s not my taste. If you are a fan of New Age music, you may find Seul extremely appealing.

You should get this album if:

You should pass on it if: 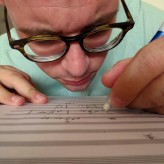 A composer from New York, who is new to Sydney’s classical music scene. Fresh from finishing his PhD, his passions are for new music, Islay whiskys, and overdressing for occasions. You can find Gerraughty at concerts by looking for the American in a bow tie!