The recital opened with an elucidating lecture on the rationale for the performance style of this Brahm’s Piano Quartet and was well received by the attentive audience. I’ve always considered the term ‘Historically Informed Performance’ rather awkward; its opposite would imply a non-historical and non-informed performance— and that is an absurdist reduction. But still, the moniker sticks. We understand the semantic meaning of the term because we understand that ‘informed’ is modified by ‘historically’, but that is a whitewash as the interpreter is mining notation for its semiotic denotation, implied meanings and ultimately a revamp of syntactic phrasing.

My digression over, Neal Peres Da Costa (piano) delved into the intricacies of asynchrony of the melodic line against the bass line (to which I’d add, was championed as far back as Mozart and was brilliantly captured by Liszt in his piano transcription of Schubert’s Gretchen am Spinnrade where the entire melody line is displaced by one semiquaver throughout), the common arpeggiation of chords for voicing and expressive effects, and the use of metric elasticity which also predate the performance practices of the nineteenth century and thus form a logical extension of known practices. These elements are not explicitly notated in the scores but rather implied in performance and that much has been gleaned from historical accounts, rare score references specifically illustrating the style, and very early recordings of the repertoire. Robin Wilson (violin) added to the lecture with some specific implications of notations and explored the nineteenth-century string soundscape with its ornamental use of vibrato. (If you’ve ever read Schoenberg’s writings and letters, you find in the 1930s his dire description of vibrato sullying string playing and his plea for its use to return to the world of ornamentation.)

Armed with unwound gut strings and original eighteenth and nineteenth century violin, viola and cello, Robin Wilson, Nicole Forsyth and Daniel Yeadon played the opening espressivo of the first movement with a delicate but warm interplay against Peres Da Costa’s modern Steinway. From the start, there was no doubt these musicians were unified in their stylistic approach but at times, especially in the titanic wash of Brahmsian pianism, the Steinway wasn’t particularly helpful.  On this point, Peres Da Costa stated that he would ideally like to be performing on his 1869 Erard. Erard’s are particularly light and bright instruments where the voicing across the bass, tenor, alto and treble registers still retains individual characteristics because of the nature of the straight-strung arrangement. A cross-strung piano such as a modern Steinway has a different sound aesthetic —evenness across all registers. This distinction is of paramount concern for anyone playing in a performance practice style but using a modern instrument, as the voicing is never quite as clear. I listened to this movement desperately imagining and willing the Steinway to oblige.

After adapting to the rather mighty tenor sound projected in the Melbourne Recital Hall Salon, I found myself adrift in the second movement Intermezzo: Allegro – Trio: Animato. Why? It was very good playing, but I wondered why Schumann and not Brahms, was considered mad. All these sixths in the piano part, the plaintive madness of the meandering strings, a Scherzo that was an Intermezzo, and why was this intermezzo so interminable – the performance certainly piqued the imagination.

The Andante con moto third movement was stellar, finely overwrought in the use of portamento for strings and superbly balanced between all instruments. The final Rondo alla Zingarese: Presto reveled in its bravado harmonic weirdness. No wonder Schoenberg considered Brahms a futurist (Schoenberg later orchestrated this Quartet and Balanchine turned it into a ballet). This was virtuoso ensemble playing from beginning to end with the piano fermatas reeled-off as if possessed by a wayward Beethoven – for Brahms, it was almost humorous. The string ensemble maintained the music’s angst and yet, intimate decorum.

Overall, this was an intelligent and interesting performance. I wondered if using the gut-string instruments would emasculate the work but this was not the case. For all the unity of ensemble displayed, the virtuosity, the aesthetic and intellectual concept underpinning the performance, the music was still Brahms, neither diminished nor deconstructed. Instead, one felt rather like Clara Schumann; that is, fascinated at championing the possibilities of this ‘new’ music, but now re-imagined by this exceptional Australian ensemble, Ironwood. 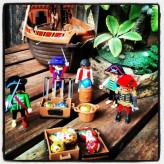 Helen is a 'non-performing' musician and plays piano, harpsichord and fortepiano. After that ambiguous sentence, her other great love is writing. She is current editor of 'Music and the Teacher', and loves writing about music.