Latitude 37 – Passions of the Soul Part 1

Held at the Melbourne Athenaeum to audiences both live and via computer technology, Latitude 37 (a group specialising in 17th- and 18th-century repertoire rarely performed in Australia) presented Passions of the Soul, the title inspired by René Descarte’s scrutiny into the nature of the passions (emotions) in his philosophical treatise of that name. Comprising baroque violin, viola da gamba and harpsichord, the musicians demonstrated a perceptive attention to historical style with great flair and imagination for this investigative journey into the early Italian baroque, where purely instrumental music found its expressive voice. The programme featured a number of composer-instrumentalists (relatively unfamiliar to us today) who held important positions in Italian cities, and were well-regarded and influential in their time. Their music displayed pioneering and innovative techniques, bearing out the tremendous and important musical creativity to flourish in this era.

Harpsichordist Donald Nicolson opened with the repeated ground bass pattern to Maurizio Cazzati’s Passacaglia, creating a sense of anticipation before the violinist Lizzy Welsh (a replacement for the ensemble’s usual violinist, Julia Fredersdorff, unable to perform due to travel restrictions) entered with the melody, soon joined by Laura Vaughan on bass viol. The sound was delicately shaded for a predominantly understated tone. It was wonderful to hear the viola da gamba used in a melodic capacity, and the Canzon a due by Bartolomé de Selma y Salaverde, a Spanish musician who worked in Venice, truly exploited the technical potential of both instrument and player. Laura performed the fast and wide-ranging themes with impressive agility, while the violin part was no less demanding. The Canzon involved a variety of contrasting moods (or passions), with small motifs tossed between the players adding to the sense of enjoyment. 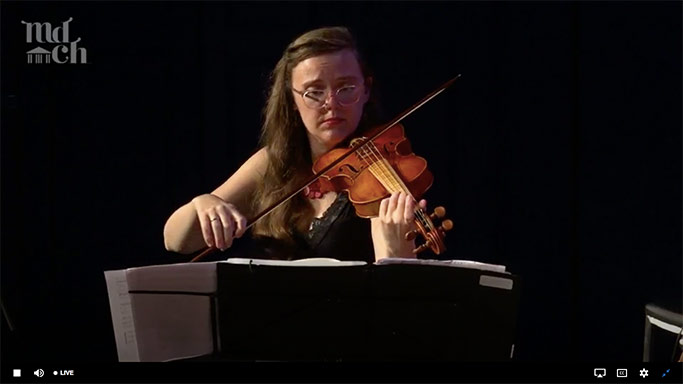 Doulce memoire by Girolamo Dalla Casa is an example of an old and familiar chanson serving as a basis for virtuosic instrumental improvisation. As Donald Nicolson’s programme notes explained, pieces which started out as vocal works were “heightened in ways that could not be performed by experienced singers.” The gamba’s tone was rich and sonorous for the sombre tune, while Laura’s diminutions, or decorations in rapid notes, were beautifully flowing. Based on an old Spanish dance, Giulio Caccini’s tune Non H’al Ciel took the form of contrasting instrumental variations above the musical scheme, with Lizzy invigoratingly rhythmic and dance-like on the violin. The music involved some effective syncopation and exoticism. The strings played pizzicato while the harpsichord took a turn at the tune, and the ending had a lovely lilt as violin and gamba converged together.

Donald provided consistent solid support, at all times attentive to the activity of the upper parts. His creative accompanimental approach maintained a lively interest, with ever-changing articulations increasing the diversity of texture. The multi-sectional Sonata detta la Desperata à 2 for violin and bass by Carlo Farina was intriguing in its display of novel and ingenious violin techniques such as double stops, glissandi, slides, chromaticism and unpredicted changes of tempo and metre, to say nothing of the unconventional ending. The devices employed to express the despair inherent in the sonata’s title were ably handled and to great effect by Lizzy Welsh. Two characterful dances by Cazzati preceded Tarquinio Merula’s highly virtuosic Ciaccona, enlivened by a pulsing ostinato, syncopation and kinetic harpsichord runs. Laura introduced Ignazio Albertini’s Sonata prima for violin and basso continuo, another piece of great originality featuring dazzling passagework. Lizzy imparted a lovely cantabile quality for the lyrical writing, and was admirably adept in the fast-moving ‘fantastical’ sections.

Biagio Marini’s La Romanesca comprising variations over a repeated chord sequence was the final piece. Latitude 37 rose estimably to the challenges of this virtuosic repertoire, and their passion for the music shone through. To conclude, Chris Howlett, one of the Directors of the Melbourne Digital Concert Hall came onto the stage for an impromptu chat with Laura Vaughan. In response to some audience questions, Laura talked about the different bow shape and bow hold used for a viola da gamba, and how it allows for a variety of articulations. She also mentioned the instrument’s capacity to play in the alto range, and consequently its suitability for taking a melodic part in a trio sonata, as well as the accustomed role of providing the bass line.

Passions of the Soul is to return with Parts 2 and 3 under the auspices of the Melbourne Digital Concert Hall. 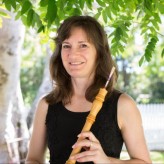