‘It’s funny how I always get to hear my music for the very first time whilst walking along the footpath! It is just wonderful hearing my music float out of your rehearsal window’

It was a warm reunion of hugs between old friends and the atmosphere was one of great excitement and anticipation. This was the first time Acacia was to play ‘Mark and Adrian are her sons’ for Lyle and get some feedback. Although we had only rehearsed it a couple of times on our own we are already in love with the simplistic beauty of the opening, the cool, grungy rhythms of the ‘Bad Scooter’ middle section and the vulnerable interplay between the violins in the final sections. On the first read through, Lyle can hardly talk and just smiles at us with his hand on his heart. We are all moved.

This is the fifth time Acacia has had the pleasure of presenting a world premiere performances of excerpts from Lyle Chan’s epic String Quartet. Each time his compositions have given us a deeper understanding and respect of Lyle as a composer and person and the bond between us is now very strong. Recently, Acacia was also fortunate enough to work with Lyle on another deep level when he produced our CD, ‘Fast Blue Village‘ with Vexations840. As my violin partner Lisa Stewart agrees:

‘Lyle is the best Producer I have ever worked with! He reads our personalities so well now and knows how to bring out the best in us’.

I highly recommend you read Lyle’s own blog about his work ‘Mark and Adrian are her sons’ on his own website. You deserve to hear the real story from him! In brief though, ‘Mark and Adrian are her sons’ deals with Lyle’s incredible memoirs of being an AIDS Activist for ACT UP in the 1990s and a particularly distressing encounter he had with the NSW Member of Parliament, Mrs Franca Arena. She wanted to pass a special bill through parliament to give financial compensation to the “innocent victims of AIDS” as she called them, those that had acquired HIV medically and not all those other “guilty gay victims”. It is a sad and moving story and says a lot about Lyle’s strength of character and his compassion for others.

Next time I’ll write about Acacia’s other favourite composer, Elena Kats-Chernin. Acacia will be performing her ‘Anna Magdalena Notebook’ and other compositions by Gordon Kerry, Graham Hair and Osvaldo Golijov with the wonderful singing group Halcyon. Our upcoming concert ‘A Sense of Connection’ will be on Friday 31st August at Sydney Grammar’s incredible underground New Hall. 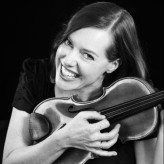 Myee Clohessy is a violinist with the Acacia Quartet based in Sydney. She studied in Australia, Hong Kong and London with Alice Waten and David Takeno. Performing throughout Europe and Scandinavia for ten years Myee settled back in Australia in 2003. She specialises in both Modern and Period Violin playing and has toured with both the ACO and Australian Brandenburg Orchestra.

Sally Whitwell talks about inspiration, creativity and her personal style