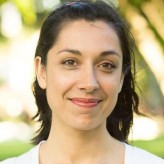 Tara is a musician and music teacher in Sydney. She completed her bachelor of Music at Sydney Conservatorium of Music in 2010, studying viola with Nicole Forsyth. She specialised in historical performance of baroque and classical music and has since played with some great local ensembles, including the Australian Brandenburg Orchestra, Sydney Philharmonia Choirs and Pinchgut Opera. Tara plays both violin and viola professionally. Tara's musical appreciation is by no means limited to baroque music - she loves listening to and playing many genres, particularly indie rock and 20th century music (a great period for the viola!) As well as teaching violin and chamber music, Tara runs early childhood classes which are a fun and rewarding way to enjoy music. Tara also writes a column on music education for Nurture - Natural Parenting Magazine. She's currently preparing a production of a 17th century English Masque, "Cupid and Death" which will be performed in Sydney next year.

Just before Christmas, orchestra seventeen88 gave their debut concert at Sydney Grammar School to a full house of enthusiastic supporters. This new orchestra focuses on music of the Classical and Romantic era, performing this repertoire in an historically informed way,…