I was very excited to see this new music mini festival appear on the arts calendar. I feel new music and experimenting with what is performed to audiences is often lacking in the scene – or at least there could always be more of it! What I love about the Ensemble Offspring is that although you may not personally connect with every single piece that is performed on their programs, they are not afraid to try new things, pushing the boundaries as an ensemble – both individually as performers but also in what they present to their diverse audiences.

This festival explored new sounds, traditional conceptions of concert venue spaces and presented the sort of music that makes one think beyond the moment of the performance itself. The title of the festival KONTIKI RACKET sums up the ensembles ambitions for these two days of music.

“We derived the name of our first ever micro-festival from a combination of the famous Kon-Tiki raft expedition, suggesting a sense of adventure and a risky voyage combined with the double meaning of racket as a loud noise and its less familiar meaning of leading an active social life.”

The purpose of the festival was not only to bring new sonic experiences to the audience in a casual and relaxed atmosphere but to also inform and educate those in or thinking of entering the industry, or perhaps those just simply curious about what happens behind the scenes. I was fortunate enough to attend day one of the festival however looking to day two, there were some great industry events on offer:

The space for the performance, The Nest Creative Space, is a unique warehouse, used by various artists as studio spaces by day. Upon walking into the warehouse, I felt as though I were in an antiques store or at a vintage or art market, with crowded walls with artist works and materials, multiple tables with different items, plants and sculptures of various shapes and types, small nooks and crannies into which I wanted to investigate further and collections of various things hanging from the walls and roof. While this may sound overwhelming doubled as a live music venue, it was quite the opposite, the space complementing the music heard.

The first concert of Kontiki Racket was a new music set which made no apologies for its bold beginning! Xenakis’ Dmaathen (1976) for Oboe and Percussion is an extremely challenging work described by percussionist and ensemble lead, Claire Edwardes, as not humanly possible to play as it has been written. However this added to the dramatic tension of the performance. This performance was intense and fearless, the tonal extremities of both instruments truly explored. Some of the sounds, especially of the oboe, were new experiences for me which made for an exciting and captivating performance and beginning to the program.

The second work in the set, Dispersion of Light by Prism (2016) by Julia Reidy, was a favourite of mine for the evening. This was an extremely beautiful and meditative work which seemed to be perfectly accompanied by the tranquility of Saturday evening brought by the humidity and summer heat that day. The performers created the resonant soundscapes of this work bringing a calm that starkly contrasted that of the first work of the evening.

Vibe-Rant by Holly Harrison was a piece with wild attitude. Like a conversation, the instrumental lines alternated between communicating with one another and having an individual “rant” so to speak, going on their own trains of thought but then meeting again with one another. By the end of the work, that had become a chaotic conversation, it seemed overwhelming for the flute line, with overblown flute techniques and wild foot stomping, trying to make a scene to be heard and noticed over the “nonsense talk” (well done to Lamorna Nightingale on flute). This received a laugh from the audience!

Although performed well, L’ere de rien (2002) by Mantovani was a work I personally did not connect with. The works title meaning “the era of nothing” could be connected to the ideas of the final work for the set by Coelho – read/write error (2015). This work is an musical expression of the digital world in which we find ourselves in. Listening to this performance, the instrumental sounds strongly represented for me what data would sound like if we could see it all floating around us – our wifi connection, satellite signals and radio waves. While this was a busy work, amongst this, I sensed a loneliness – although we can connect with one another and the world in a multitude of ways, it is inescapable; genuine human connection is still always needed.

After a break with food available from a Vietnamese food truck and BYO drinks, we launched into an improvised set with violin, cello, bass clarinet, electric guitar and electronics. This was followed by a performance of Morton Feldman’s Three Voices, performed by soprano Sonya Holowell.

This is an extremely special work that’s beauty I find difficult to adequately describe in words. With two of the three vocal lines pre-recorded by Sonya herself (this would have been a feat in itself), this work starts with purely repeated vocal tone patterns that very gradually evolve in to the words of a poem by Frank O’Hara titled “Wind”. The poem however is not sung as one may objectively expect – it is fragmented, using the vocal sounds these fragments create to seamlessly morph into the texture and sound scape created by the pure vocal sounds that preceeded. I was completely immersed in the peace and ethereal beauty of this performance which I feel was similarly experienced by the audience. It is a long work (50 minutes) which I must truely congratulate Sonya on performing – the stamina and concentration that this work requires to be performed in such a way is huge.

Day one of this festival brought a sense of innovation, diversity, and importantly It was fabulous to see such a great turn out to day one of the festival and I hope more and more people continue to come these gigs and support the vibrant new music scene we have in Sydney.

Be sure to watch out for the 2018 Kontiki Racket! 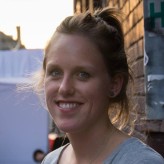