Whilst concert halls and theatres across Australia remain dark amidst the COVID-19 pandemic, newly formed experimental improvised music duo Sumn Conduit have released TRACK: a fifty-five minute composition conceived in real time in October 2019 at Carriageworks, Sydney as part of the Liveworks Festival of Experimental Art.

The duo, consisting of Indigenous Australian improviser and experimental vocalist, Sonya Holowell and modular synthesist and composer Ben Carey, accurately describe their music as being ‘rich’ in genre ambiguity – a result of their diverse musical backgrounds.

The artists admit to a broad ‘melting pot’ of influences working their way into their music including, but not limited to the genres of spectralism, musique concrète, postmodernism, and IDM (intelligent dance music). Sumn Conduit’s sound-world can be likened to those of Claude Vivier, Morton Subotnik and Bernard Parmegiani, though the palate required to produce such sound-worlds is broad and all-encompassing.

Synthesist, Ben Carey is accurate in describing their genre as ‘difficult to pin down’.

Admittedly in art music, after some decades in retrospect, musicologists will stop to ‘categorise’ or ‘label’ the music that a certain decade, school of thought or nation has produced over a stretch of time. They will often develop broad, encompassing terms in order to organise academic thought, discuss their ideas and accurately account for music that has been composed over recent decades and centuries. (A lively debate still hums along over what ‘postmodernism’ in art music actually includes, for instance.)

And whilst this process of organisation has occurred in the cases of the Second Viennese School, musique concrete, spectralism and more, Sumn Conduit find themselves making their own mark and forging their own way forward in experimental music today, sharing their new sound with the world.

Russian composer, Igor Stravinsky once noted that the basis for compositional ideas (whether they’re included in a final score or not) should come from a place of musical ‘instinct’. In TRACK, Sumn Conduit capture this element of ‘instinct’ in their experimental improvisation, fusing their musical abilities and broad colour palate with instinctual emotions, thoughts and musical concepts. Their instinctual intelligence is crucial in deciding where and how a performance progresses.

‘[Our] process is responding to the situation at hand… it’s not a conscious process, it’s more inherent’ says Carey. ‘In improvisation you have one decision path and that fork in the road… is very much governed by what’s going on right now – ‘going on’ meaning a few different things… You might make a shift or a change in anticipation of where I think something might be going.’ His duo partner Sonya Holowell agreed, saying ‘There is responding but there’s also pre-empting, both of which require you to be completely in that moment in a heightened state.’

In TRACK and in Sumn Conduit’s other performances, Carey must design an entire ‘sound-world’ before commencing an improvised performance. He admitted he felt a great deal of ‘responsibility’ in this instance.

‘When I come on stage I have to have designed a sound-world… I have to have composed my instrument… You don’t compose a piano or a saxophone, but with a modular synth you have to decide what the sound is going to be because otherwise there will be no sound at all…’

Carey’s synthesized sound-world in this album contain sounds that are layered sporadically and indeterminately on a constant, commencing with an initial warm drone. The listener experiences an unmoving and meditative journey of constant adding, subtracting and editing the sound-world. TRACK places the listener in a state of acceptance of uncertainty and subsequent sonic immersion in the work. It includes haunting effects of hard left-right stereo panning of percussive effects, unnerving pitch-bent frequencies (sounding extreme intervals away from the bass drones in the lower frequencies), confronting electronic rattles, almost-pure sine tones and hints of a sound resembling a quasi-deconstructed gamelan towards the end of the performance. In crafting this ‘sound-world’, Carey fulfills a noble purpose that all quality composers aspire to – to establish a great sense of both unity and contrast. With immense care in a context of experimental, live collaboration with duo partner, Sonya Holowell, Carey unites the voice by responding in real time to her choices in timbre, pitch and vocalisation. Sumn Conduit demonstrate a unique and rare ability in effectively pairing the acoustic and the electric. In particular, the duo achieve what they set out to as composers and artists in their own right in an instinctual and groundbreakingly experimental fashion, adopting their own wording of ‘unity and contrast’ as ‘oneness and multiplicity’. (TRACK program note).

Notably, Indigenous Australian artist Sonya Holowell’s contribution to TRACK is nothing less than powerful and wide-ranging in tonal colour. In a patchwork of through-composed text conceived in real time through a process of self-reflection and ‘dissociation’, Holowell’s broad vocal spectrum is achieved through ambitious and avant-garde techniques that recall the sprechstimme of Arnold Schoenberg in his Pierrot lunaire (Op. 21), the gibberish text and virtuosity of Sequenza III for Female Voice by Luciano Berio and all at the same time, a more modern, closer-to-home vocal colour palate inspired by artists such as Nai Palm from Hiatus Kaiyote. Holowell displays elements of vocal virtuosity with a piercing, yet warm whistle register, the sounding of inspirations (inhalations) and sparing and sensible use of laryngeal vibrato. She also contributes to the sense of experimental collaboration, responding to Carey’s synthesized effects with clear tonal imitation in her responses.

Something also of great significance is the text that Holowell selectively vocalises in this work. Her process includes a reflective process of an ‘Innigkeit’, of sorts.

‘There’s this internal world happening which is giving me a lot of information and I’m going in there and responding to some of that information… body memories, flashes and images and different states of being’ said Holowell.

She describes her process as including a ‘dissociation’ from her thoughts in a process of ‘stepping aside and searching around’ in what elements to portray and reveal throughout a performance. Holowell describes the conjuring of her texts from within as something that garners more ‘clarity’ as she moves through the performance of a work, with a heightened sense of ‘hypersensitivity’ festering in her interpretation.

In TRACK Sumn Conduit worked off paintings by Australian artist Matt ‘Rabble’ Hodges. Holowell’s textual and musical choices and Carey’s synthesised sound-world were inspired by the visual stimuli presented to them at Carriageworks. They consider the paintings they’re presented with in real time as ‘essentially the score’.

You can see an example of this process being carried out on video in their most recent recording with visual stimuli, here recorded at the Art Gallery of NSW for the #TogetherInArt online video series.

Sumn Conduit have made a stellar and notable contribution to Australia’s contemporary art music scene in their release. This record is a brave step forward for not only the duo, but the wider Australian experimental scene. Be sure to don a set of your favourite headphones or fire up the home stereo to experience this sonic journey that will have you hanging off every utterance of sound. Lose yourself in the sound-world that is Sumn Conduit.

TRACK can be purchased on BandCamp. 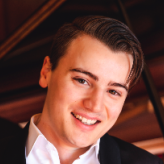 An operatic baritone, Jeremy Boulton is a former recipient of the Opera Australia Student Scholarship and graduate of the Talent Development Project, Jeremy has featured as a concert soloist for the Opera Australia Benevolent Fund, Sydney Conservatorium of Music (Early Music Ensemble, Chamber Choir), Argyle Orchestra (Hobart, Australia), Sydney University Symphony Orchestra, Opera Projects Sydney, Concordia Ensemble, con voci Chamber Choir (Wollongong, Australia) and Fiori Musicali (Armidale, Australia). Jeremy has also been engaged professionally by the Gondwana Choirs with The Muffat Collective as Aeneas in Dido & Æneas (Purcell), St. Paul's College in King Arthur ​(Purcell) and by The Co-operative as the Secret Police Agent in The Consul (Menotti) and Death in Savitri (Holst). Winner of both the Margaret Olive Stewart Bequest Scholarship and the PATIM Fund Scholarship, Jeremy studies with Maree Ryan AM. He received joint first prize at the 4th Fresno State Art Song Festival, (California, USA) and was awarded the Demant Dreikurs scholarship upon winning the Lieder Competition at the Sydney Conservatorium of Music in 2020. He also received artist assistance from the Sidney Myer Fund & The Myer Foundation's National Assistance Program and an Italian language merit scholarship to L'Università Per Stranieri di Perugia (The University for Foreigners Perugia, Italy) through L'Istituto di Cultura (Italian Cultural Institute, Sydney). Jeremy is currently reading for a Masters of Opera Performance on the John Holt Todd and Florence Todd Scholarship at the Sydney Conservatorium of Music. Masterclasses include that by Jessica Pratt, Gerald Finley OC, CBE and Dr. Graham Johnson OBE. ​ He is a Full Member (Arranger) of the Music Arrangers’ Guild of Australia (M.A.G.A.) and an Ambassador for ClassikON. Jeremy is also the Manager of APRA Art Music Award Winning ensemble, Steel City Strings Chamber Orchestra.

Review: Sideband - From the Depths